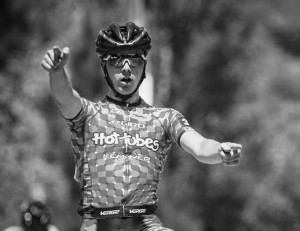 Goals for 2016: For the 2016 season I would love to be able to get a win at a NCC criterium as well as help the team to a NCC overall podium spot.

Personal Hobbies/Interests: Playing guitar, skateboarding as well as working on motorcycles and cars. I also enjoy woodworking where I build custom skateboards and electric guitars.

First Bike: My first bike was a hand-me-down bmx from one of my brothers. I had a few other bmx bikes over the years but my first real road bike was a 24in trek with shimano that I used for both road and cyclocross.

What would you be doing if you weren’t cycling? If I wasn’t cycling I would probably be living in California with my oldest brother surfing and building motorcycles.

Favorite Training Ride: I think my favorite training ride has to be an easy hour spin down to the beach. I live on Cape Cod so the water is only a few miles away and I love just cruising down and back. Its super laid back and just a good time.

Favorite Race: My favorite race would probably have to be the Roswell crit but a close second would be Dresden von Axel which is a junior stage race in the Netherlands that’s just absolutely insane in every way.

Favorite Music: I listen to a lot of music but I really enjoy old school heavy metal and punk rock.

If you could race any cyclist (dead or alive) who would it be and what discipline: The rider I’d like to race the most would probably be Tom Boonen only because he’s always been at the top and I could definitely learn some things about cycling from him.

If you could write the first line for your personal Wikipedia page what would it say: My name is Ian Keough and here's my epic story….

Toughest race you’ve done and why: Probably Dresden von Axel, which is European junior stage race. This is the toughest one because there's over 200 guys on tiny technical 5 foot wide roads where everyone is trying to fight for the front! The race is more mentally tolling than anything and that’s why I think its so much harder than any other race. Its flat and fast which is my kind of racing and I absolutely love it!

What cycling accomplishment are you most proud of? I think I’m most proud of the fact that I was able to become professional my first year out of juniors. Astellas has given me this opportunity and I’m really glad to be a part of this team!

Any unique pre-race routines or lucky charms? I don’t really have and lucky charms but before every race I always say a pray just to make sure I get through it safely!